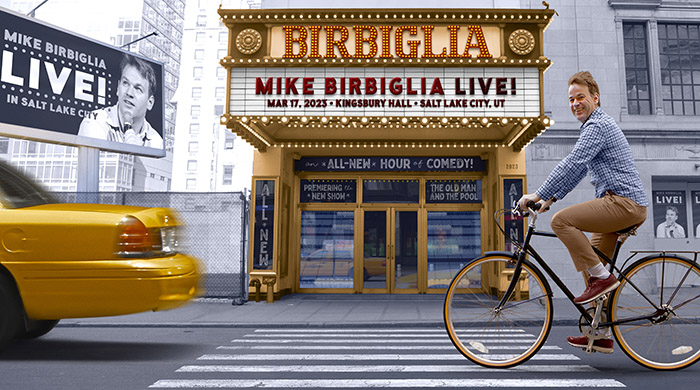 Mike Birbiglia is a comedian, storyteller, director, and actor who has performed in front of audiences worldwide, from the Sydney Opera House to Carnegie Hall to Broadway. His five solo shows "Sleepwalk With Me," "My Girlfriend’s Boyfriend,” "Thank God For Jokes," and "The New One” enjoyed successful runs on and off Broadway. “My Girlfriend’s Boyfriend” won the Lucille Lortel Award for Outstanding Solo Show and “The New One” received the Drama Desk Award as well as the Outer Critics Circle award for outstanding solo performance. Birbiglia is also a filmmaker who wrote, directed and starred in the films “Sleepwalk with Me” and “Don’t Think Twice.” As an actor, Birbiglia has appeared in the films “Trainwreck,” “The Fault in Our Stars,” “Popstar,” “A Man Called Otto” starring Tom Hanks, Taylor Swift’s music video for “Anti-Hero,” as well as TV roles in “Orange Is the New Black” and “Billions.” He is the host of the podcast "Mike Birbiglia's Working It Out” and just finished a sold out 85 performance Broadway run of his new show “The Old Man and the Pool” at the Vivian Beaumont Theater at Lincoln Center.

Ticket delivery options (select at check-out):
–Order online and print your tickets at home. It’s easy, and you won’t have to wait in line.
-Pick up at will call. Box Office hours: Tuesday-Saturday noon-5:00 PM

Additional Information:
Everyone must have a ticket regardless of age. No lap sitting allowed.